Book I Defiance on Indian Creek 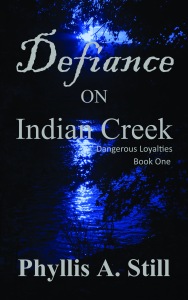 This Young Adult Historical novel, tells the fictional account of young Mary Shirley who just wants a normal life with friends her age and someday, suitors. She is brave, tenacious, and prone to be rash.

The settlers along Indian Creek in Western Virginia are siding against King George, except Papa. He has declared loyalty and intends to remove the family to Kentucky territory.

After discovering surveys with strange riddles, Mary witnesses her papa exchange documents between a patriot neighbor and a known loyalist. She believes Papa is a cowardly traitor, endangering the family.

Internal struggles lead to lost trust and acts of defiance until Mary is faced with a dangerous decision: loyalty to Papa or loyalty to a cause. Lives are at stake no matter what choice she makes—one, puts hers at risk.

My perch for all things writerly. Readers and fellow authors welcome. Short, yet informative posts, pictures, and updates on my writing journey.

My journey to trust Him deeper

A Project of the Story Circle Network

All Things Writing and Geek, in one neat little blog!