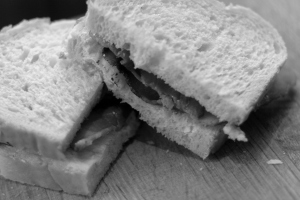 Before almost dying in the desert, my family almost died in a dry riverbed.

Our gray Volkswagen wouldn’t move. Dad and my brother, Barry, tried to dig sand away from the tires while I sat in the backseat. Mom held my baby brother, Stephen in the front seat. A hot breeze blew through the windows, along with sand.

Mom reached into the picnic basket and handed me half of a bologna sandwich. When I took a bite, it crunched.

“Sand must have blown into the basket. But it’s all we have, so eat it if you’re hungry.”

I can still hear the crackle of tiny rocks and feel the grit in my teeth with this memory.

Upon inquiry, Mom told me the story. (Summary mine.)

Your dad had one of his, ‘Let’s see where this road goes,’ moments. But instead of a road, it was a dry riverbed. We hit sand, and the Volkswagen sank up to the bottom of the doors.

Your dad, and Barry, tried to dig us out, but the sand just filled in again. They even tried shoving dead tree limbs down to the tires for traction, but it didn’t work.

It was just supposed to be a Sunday drive, and we would be home for lunch, but I always packed a basket with food and water because the area around Phoenix was remote desert.

We were scared. The sun was going down, and it was getting cold. We didn’t have blankets. Then all of a sudden, a jeep appeared with two men. They were just out riding around, about to head home, when they spotted something.

They tied a rope to the front of the Volkswagen and the other end to their hitch, and pulled us out. They even followed us back to the road.

Divine intervention? I’d say so. And I still have an aversion to gritty foods.

Because romping about is not socially acceptable.